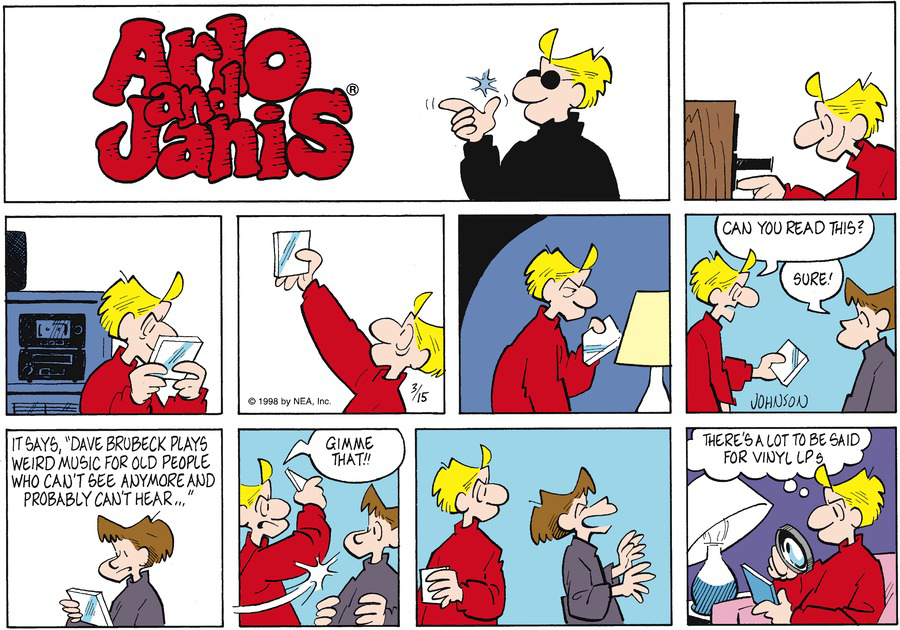 Today’s retro comic is a Sunday from 1998 and features the two “throw-away” panels in the top tier. These are designed to be discarded, along with the logo, if newspaper editors want to dispense with the entire top third of the cartoon to save space. Not long afterward, I went to the standing bookends logo. Yes, I did it to save work. Absolutely. Check out the component stereo—and vinyl is making a comeback. Well, it appears the “comment” problems here are largely solved. I told many of you via Facebook yesterday that I would elaborate. Turns out it was a spam filter, what WordPress calls a “plug-in.” I know. The first thing WP tells you in the event of a problem is, Start disabling plug-ins. I did not do this sooner, because, frankly, this doesn’t usually work, just like Microsoft’s familiar option, “Would you like us to search for a solution to the problem?” Also, I have used this particular well-known spam filter for more than a decade, and it hummed along in the background, doing a very good job. Until recently. Now, I’ll have to manually weed out spam occasionally, but it sure beats having to manually approve every post and having everyone agitated all the time. As for the “signatures” on your posts, this seems still to have some issues. I suggest everyone fill in the information again, and we’ll see what happens.