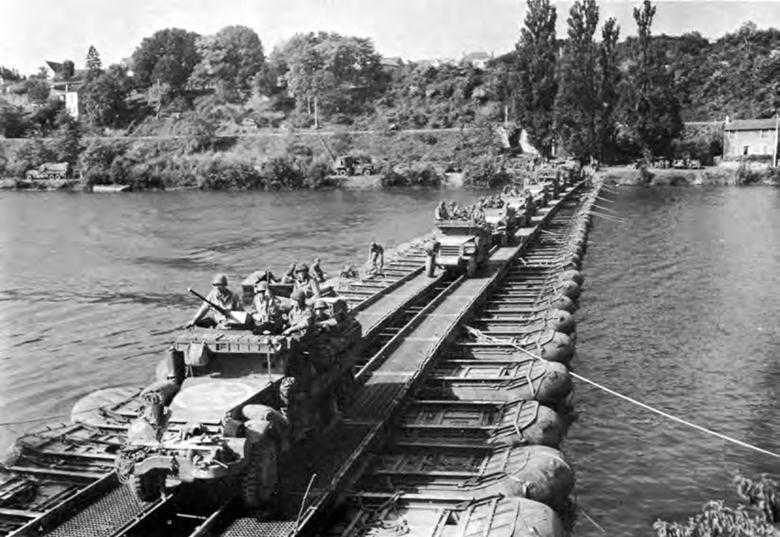 a
As part of the First Army’s 3rd Armored Division, my father and his buddies in the 23rd Armored Engineering Battalion bridge the River Seine in France in the summer of 1944, near where Orly International Airport is today. Soldiers of the 23rd went on to bridge the Marne River east of Paris, the Meuse in Belgium and the Rhine in Germany, among others. They fought for weeks in the Battle of the Hürtgen Forest, the single longest battle in U.S. Army history. During one of the coldest winters in local memory, the combat engineers fought in the Battle of the Bulge as armored infantry. They dynamited holes in the Siegfried Line, Germany’s western wall of defense, and removed thousands of mines. The 3rd Armored Division overran the German towns of Paderborn and Nordhausen, capturing the V-2 rockets manufactured there and preserving the technology for America. They also discovered and freed a nearby concentration camp where inmate slaves were being worked to death in the underground rocket plants. In the spring of 1945, the 3rd Armored Division, the “Spearhead Division,” was deep in Germany and about to meet Soviet troops coming from the east. My father and his buddies were preparing to bridge the Mulde River when they were ordered to stand down. The war had ended. My father survived this experience and came home in the fall of that year. He did not tell me these things. I learned them through my own research, much of it conducted after his death in 1992. And I wonder, how does someone walk away from something like that and go back to a normal life. I guess I should know, he never really did.